Cats are even better sun worshippers than most humans, and most can lie in it all day without it damaging their skin, however for some cats this is not the case. Cats with non-pigmented areas of skin (and often a sparse covering of hair) can suffer damage to the skin which can be very serious.

The areas most commonly affected are the ears, eyelids and nose. Initially the damage will show as pink areas, scaling and hair loss.

However continued exposure will lead to more serious crusting of the skin. If this is not treated and the cat is not protected from the sun then a serious skin condition SCC (Squamous Cell Carcinoma) can develop. This is a malignant tumour which will spread locally, destroying surrounding tissue.

As the condition gets more serious, the skin looks very red and there may be ulcerated areas with raised hardened edges.

Prevention: Prevention includes, not letting your cat out during the hottest part of the day (between 10am-3pm), and using a high factor sun block on the vulnerable areas, however most cats will groom this off rather quickly!

If the vet thinks the damage is already too severe, they may suggest a biopsy, which would involve an anaesthetic or in some cases they opt to remove the damaged, non-pigmented areas of skin (ears).

Surgical excision can be curative if all the damaged skin is successfully removed.

Matilda was a stray cat that was handed into us at the surgery, the local rescue centres were full, and so Matilda lodged at our kennels for a couple of weeks while waiting for a space. All of our nurses fell in love with her, in particular Melissa who kindly gave Matilda a loving home.

Matilda’s ears were showing early signs of SCC and the vet suggested she have her ear tips removed.

She recovered well from her operation, and looks adorable with her new healthy ears! 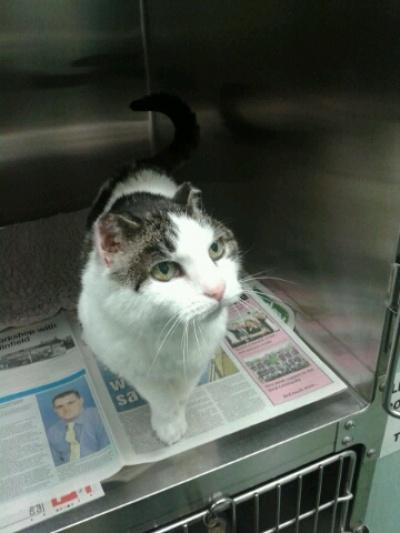